Switzerland’s interesting architectural attractions include old stone houses, castles and cathedrals across the country, and many fascinating museum buildings! But history-lovers are not the only visitors who will find plenty to interest them in Switzerland. From the early 20th century onwards, the country has produced several daring and visionary architectural wonders that have achieved global renown. Many of their works enrich the beautiful vista of the country with mellow contrasts and modern accents.  Probably the reason why the country has earned a reputation for being a big, open-air museum!

Here are seven of the most brilliant and ingenious constructions in the country. 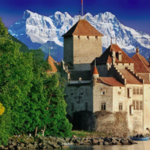 Switzerland’s most famous historic structure, Chillon Castle is one of the most intriguing buildings in all of Switzerland. Located near the resort town of Montreux, the castle sits in front of one of the most picturesque backdrops of the Alps. The castle has a fascinating history including serving as a defensive camp during medieval times and eventually becoming a prison, it’s first construction dates back to the 10th century! 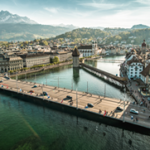 Kapellbrücke, better known as the Chapel Bridge sits in the city of Lucerne. Stretched across the Reuss River this structure built in 1333, is  the oldest surviving wooden bridge in all of Europe. The interior of this bridge, sports paintings in triangular sections that detail the city’s history. 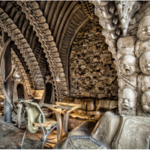 Giger Museum and Bar, Gruyères; is an ode to Oscar-winning Swiss Artist H.R. Giger-known for his work in the movie ‘Alien’! Giger turned the Château St. Germain castle into an extraordinary exhibition after the iconic success of the Movie! His surreal work- the famous film decor, pictures, sculptures, and furniture come alive inside the beautiful castle! Equally fantastic are the furnishings of the affiliate HR Giger Bar where you can take a seat in and sip martinis in a vault of bone. Opened in 1992, both locations crawl with all the spooky Biomech you would expect, including versions of the Harkonnen Capo Chair Giger designed for Jodorowsky’s film Dune. 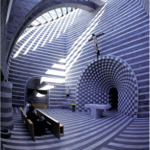 A departure from the traditional architecture of a church or cathedral, the church of San Giovanni Battista in Ticino is made up of modern geometrical shapes: a cylinder, a rectangle, a circle. Made of white marble and dark gneiss, locally sourced from the nearby Maggia Valley, the structure lets in light from above, through a glass roof, enhancing the spiritual atmosphere.

After an avalanche in 1986, destroyed, the original 17th-century church, a Swiss architect Mario Botta was appointed to erect a new church on the premises.Monumental yet modest in its proportions Botta’s church, completed in 1996, was  a structure in his signature style -strong, geometric, towering. 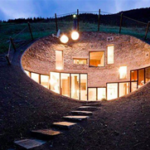 Though this villa wasn’t really meant to be a hobbit home, there are many hobbit influences. Designed by Bjarne Mastenbroek and Christian Müller, this hillside home leaves nature unspoiled. The wide elliptical opening that accentuates the view could be mistaken for the entrance. But in fact, the entrance is located in a separate traditional barn which is connected to the living quarters with a tunnel, a few paces away. 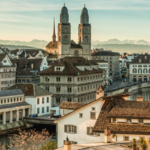 An iconic building in the Zurich city landscape- Grossmuenster Church is a historic Romanesque church with double towers. Its sombre interior reflects its role as the birthplace of the Protestant Reformation in Zurich, from where the tide of religious reform swept across the country and shaped Switzerland into the country it is today. 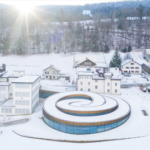 The spectacular new home of the watchmaker Audemars Piguet, this spiral-shaped museum completed by the Bjarke Ingels Group is  in Le Brassus, Switzerland is a modern architectural wonder. The 2,373-square-metre building is a continuous spiral path and explores  the process of the brand’s 145 years of watchmaking throughout the new spatial organization.